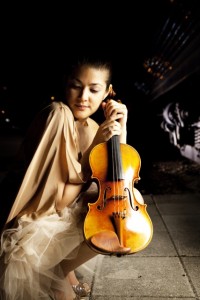 Praised by The Miami Herald for her “tonal sweetness, alert dynamic detailing and commanding musicality,” the French violinist Anne Chicheportiche is described by The Washington Post, as a violinist who plays with “fierce assurance.” She has been displaying her “virtuosity and tonal sheen” as a soloist, chamber musician and concertmaster of orchestras in Europe and the United States.

Anne has served as concertmaster of orchestras in Chicago, Washington D.C. and Miami.  In 2006, she became a member of the Civic Orchestra of Chicago, America’s foremost orchestra for young musicians from around the world. During her years with the orchestra, she performed under the batons of important conductors, including Bernard Haitink, Pierre Boulez, Alan Gilbert, Kent Nagano and Myung-Wun Chung. Other orchestra positions and collaborations have included appointments with the Orchestre de Cannes (France), Orchestre de Chambre de Genève, Verbier Chamber Orchestra (Switzerland), New Millennium Orchestra (Chicago), Nice Academy Festival Orchestra (France) and the Philharmonic Orchestra of the Americas (New York), in venues as diverse as Carnegie Hall, Alice Tully Hall, Chicago’s Symphony Center Orchestra Hall, Geneva’s Victoria Hall and Mexico’s Auditorio National, among others.

An avid performer of contemporary music, Anne has premiered and recorded numerous works by contemporary composers, most recently giving the United States premiere of Nicolas Bacri’s Violin Concerto #3.  She was invited to perform with Le Balcon, an established parisian contemporary ensemble, for their United States debut. Anne has also performed and recorded with well-known artists of different musical genres, including Smokey Robinson, Barry White, The Temptations, Dionne Warwick, Ely Guerra, Natalia Lafourcade, Aleks Zyntek, and many others.

Anne studied with international recognized musicians as Stefan Ghiorghiu, Ilya Kaler and the Guarneri Quartet. She is a graduate of the Geneva Conservatory (Switzerland) as the winner of the Prix-Vidoudet (the conservatory’s highest honor for a stringed instrumentalist). She holds a Master of Music degree from Depaul University (Chicago) and a Doctor of Musical Arts degree from the University of Maryland. Not only Anne is an accomplished musician but also the founder of musimelange, the artistic director of the MISO Chamber Music Program and the Verbier Festival Chamber Orchestra Manager.