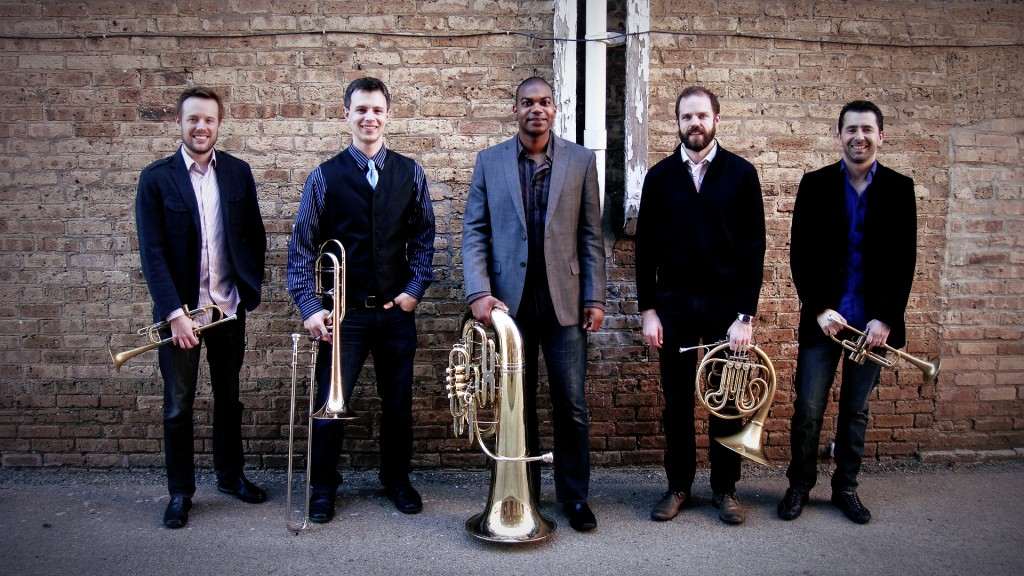 Praised for their “high level of musicality and technical ability” and  for their “clean, clear and precise sound”, the award-winning Axiom Brass Quintet has quickly established itself as “one of the major art music groups in brass chamber music.” As the only Brass Quintet in 27 years to ever win the prestigious Chamber Music Yellow Springs Competition (2012), and the only American ensemble to ever win the Preis der Europa-Stadt Passau in Germany (2012), Axiom has also been named winners of the 2008 International Chamber Brass Competition and prize-winners of the 2010 Fischoff Chamber Music Competition, the Plowman Chamber Music Competition, and the Jeju City International Brass Quintet Competition in South Korea.  The Axiom Brass is dedicated to enhancing the musical life of communities across the globe and educating the next generation of musicians.

Axiom’s commitment to education and their blend of virtuosic performances and dynamic teaching have inspired young audiences around the nation, earning the ensemble the 2011 Fischoff Educator Award.  Their educational concert “Let’s Make Music” has captivated thousands of elementary and middle school students in the U.S.  Since 2011 the ensemble has been featured as brass quintet-in-residence for the National Brass Symposium, sharing the stage with principal brass players from the Chicago Symphony, Boston Symphony, Cleveland Orchestra, New York Philharmonic, Philadelphia Orchestra, Los Angeles Philharmonic, and Atlanta Symphony.

Internationally recognized for their groundbreaking programming, their repertoire ranges from jazz and Latin music to string quartet transcriptions, as well as original compositions for brass quintet.  Axiom Brass’ performances have captured the hearts and imaginations of their audiences, leading the ensemble to national radio and television appearances as well as concerts in Asia, Europe and across the U.S.  Axiom’s dedication to brass repertoire has led the ensemble to commission and premiere several new works, including recent premieres of Celestial Suite by James Stephenson and For Then and Now by Laurence Bitensky. For Celestial Suite, Axiom Brass partnered with the New York Philharmonic Brass Quintet, the Chicago Symphony Brass Quintet, the Chicago Chamber Musicians and the Fischoff Chamber Music Society, as well as with the Digital Visualization Theater of the University of Notre Dame and Professor Keith Davis.

Highlights of Axiom’s past seasons have included: concerts in Dominican Republic, Germany, Portugal, Spain, South Korea and Japan, a four-week residency at the Grand Tetons Music Festival, the release of their debut album New Standards, clinics and performances at the 2010 and 2012 Midwest Clinic, their New York debuts at Symphony Space and Merkin Hall,  masterclasses at The Juilliard School and Manhattan School of Music, as well as recitals, masterclasses and solo appearances with orchestras and bands around the U.S. In October of 2013, Axiom gave the American premier of Fantasia Flamenca and the world premier of Raimundo Penaforte’s Concertice for brass quintet and orchestra under the baton of David Lockington and the Modesto Symphony.  For the 2014-15 season  Axiom will continue its rigorous concert schedule, taking the ensemble on a tour of South America, as well as concerts in Europe and around the USA.  In March of 2015, Axiom will make its debut with the Grand Rapids Symphony performing the world premier of a new concerto for Brass Quintet and Orchestra by Kyle Werner.  The 2014-15 season will also mark the release of two new albums, Sacred Brass, which will include the world premiere recording of Celestial Suite, and Astor, featuring original arrangements of Astor Piazzolla’s music.

Axiom Brass is an Ensemble-in-Residence at the Boston University Tanglewood Institute and Rush Hour Concerts’ Back of the Yards program.