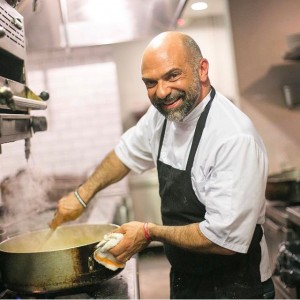 Home is where the kitchen is for Rocco Carulli, the chef and owner of R House, Wynwood. Born in New Jersey and raised by immigrant parents from Southern Italy, food was always at the heart of the household. He’d regularly journey to the local market to pick the freshest ingredients, learned from his father how to butcher lambs, rabbits and chickens, and he would take joy in preparing fresh hand-made pasta for hours on end with his grandmother; Chef Rocco found solace in cooking.

At 19, he acquired his first job at Old Time Tavern, a family restaurant in his hometown, where he worked as a waiter and his infectious personality shined with the customers. Chef Rocco went on to attend Rutgers College to study accounting, but after taking multiple courses the young student realized he didn’t have a passion for numbers. After a three-year stint working at a local bank, he asked himself what he was really passionate about in life, and when he looked back on his most cherished memories, they were those of cooking in the kitchen and working in a restaurant. This is when Chef Rocco made the decision to begin his journey of becoming a professional chef.

Kicking off his cooking career at 24, Chef Rocco worked as a line cook at Rumble Seats restaurant. After a year, he enrolled at the Culinary Institute of America in Hyde Park, New York where he finally felt he was where he belonged. Once he graduated, the aspiring chef took his newfound skills to New York City to follow his dream of working in the fast-paced atmosphere and glamour of the Big Apple, after a demanding year passed, Chef Rocco relocated to a smaller town that still had its own unique charm; Provincetown, Massachusetts.

Once in Provincetown, he was hired as a sous chef at Café Edwige, a seasonal restaurant decorated with fine art, serving a menu of contemporary American cuisine. Due to its seasonal occupancy, Chef Rocco spent his winters living and working in various cities across the country including San Francisco and various parts of South Florida. After thirteen or three? seasons of moving back and forth, the multi-city chef desired a permanent home and decided to relocate to San Francisco full time. He returned to the front of the house taking positions as a bartender at Zuni  Café and, soon after,  Asia SF  where he learned  about various  wines and vineyards, and the craft of mixology and signature cocktails for the next two years.

At 32, Chef Rocco was presented with the opportunity of a lifetime; the owner at Café Edwige wanted to lease out the dinner space so he teamed up with the restaurant’s original chef, Steven Frappolli, and the two created Edwige at Night, running the restaurant together for six years. Managing front of house operations, Che Rocco eventually took full ownership of the dinner space. Hesitant to trust another chef, he decided to helm his own kitchen as the restaurant’s executive chef, conceptualizing the menu with a combination of classic favorites and new recipes.

For seven seasons, the one-man-show would run the kitchen by day and host guests at the front of house by night. In the quaint, 75-seat bistro, Carulli relished his ability to interact with the loyal customers that he’d come to know by name over the years. During the off-season, Carulli had established himself in Miami where he worked for the late developer Tony Goldman of Goldman Properties at WISH café in South Beach.

After many years of success with his seasonal venture, Chef Rocco felt it was time to seek a year-round project where he could showcase his front and back of house experience. With much encouragement from his family, friends and supporters, the talented chef and restaurateur decided to open his own restaurant R House in Wynwood, Miami’s eclectic neighborhood, which seemed like a natural location choice. Chef Rocco was drawn to the gritty, urban district and Goldman’s passion for the area’s reinvention. Feeling inspired, he decided to become a part of Wynwood’s makeover into a funky artist’s paradise and foodie haven.

Naturally, art has been incorporated into the restaurant, with Chef Rocco including a gallery in the space, that is now known as R HOUSE, or as locals affectionately know it, Rocco’s place. Inspired by his Italian heritage and experience working in new Californian farm to table restaurants, Chef Rocco has crafted a menu that focuses on Italian-American, family-style dishes made with fresh ingredients. R House is a perfect display of Chef Rocco’s culinary talent, vibrant personality and long-standing industry experience.