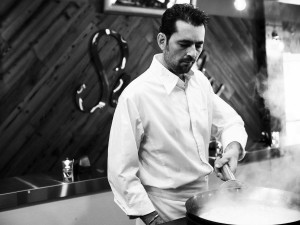 Chef Frederic Joulin is no stranger to the restaurant business. Growing up in Paris, Joulin’s father worked as a sales representative in the food industry, which introduced him early to the culinary world. By age 13, Joulin’s career path was clear.

Joulin then met notable Parisian chef Jean-Claude Ferrero, who took the young chef under his wing. Joulin completed a four-month training course with Jean Millet. Every night after school, Joulin went to restaurants in Paris to begin training. At age 15, he enrolled at the Belliard College for hospitality. From then he went on to work for reputable restaurants such as Le Divellac, Jules Verne and Jean Millet.

After earning his degree, Joulin began creating cuisine with some of Paris’ most notable chefs, including three Michelin star chef Guy Savoy. He also served as the private chef to President Jacques Chirac of France for two years. From ages 20-25, Joulin worked for Yvan Restaurant, a star studded era where he cooked and hosted for the likes of notables like Madonna, Johnny Holiday and Eddie Barclay. This experience rounded out his skills to include hosting as well as his role as a chef. It was during this time period when he learned the balance of cuisine, service and overall experience for both A-listers and everyday clients.

But Joulin wanted to take it a step further.

“When I start in the kitchen, I just want to become the number one,” he said. “At 25 years old, I decided to open my own place.”

Joulin opened his first restaurant in Paris, Le Clos Saint-Honoré. Everything in the eatery was homemade, a standard that would become integral to his cooking philosophy. Though successful, Joulin continued his quest to the top.

“I decided to change and to open a bistro,” Joulin said. “In Paris, I didn’t want to open a bistro because it was too expensive for me.” But Miami was a different story. Joulin opened the French-American bistro, Le Café des Arts in South Beach.

Owned by Timo Kipp and supported by a small, diverse team of locals, Villa Mayfair, which opened in December 2011, seeks to bring a little glamour back to Coconut Grove. With such an experienced team behind the new Miami eatery, who better to head the 4,000-square-foot kitchen than Joulin? The restaurant itself was designed by Francois Frossard and reflects the super chic South of France, with a hammered brass bar and Murano glass chandeliers.

In September 2011, Joulin began organizing the kitchen and, of course, creating the menu.

“The menu is American,” he said. “I use a lot of American products and Floridian products. My touch is like a Mediterranean touch.”

Drawing on the principals he established in his first restaurant, Joulin chooses only the best products to create his decadent dishes.

“Every restaurant has the same product,” he said. “I just want the best product.” He also still believes in the importance of homemade dishes, as evident in his Villa Mayfair Raspberry Macaron. “It’s homemade fresh every day,” he said. As a testament to his philosophy, Joulin only uses Waygu beef for his Beef Carpaccio.

“It’s the best beef in the United States,” he said. “It’s organic. I use a lot of produce products [that are] organic. That is very important.”

Also important to Joulin is changing his menu every week. In order for Villa Mayfair to be a successful restaurant and attract notable guests, Joulin changes two or three appetizers and entrees each week to keep gastronomes guessing. On Tuesdays, Joulin also offers a small bites menu and on Wednesdays, he creates a special menu for ladies.

Villa Mayfair also boasts a craft cocktail program, led by mixologist John Lermayer and Nick Nistico. Using innovative ingredients such as Pumpkin Butter, Cherry-Rose Hip Tea and Créme de Cacao, all of which are fresh and seasonal, the pair have created their own twists on American and European classics, as well as Miami staples.

Managing his 12-member kitchen staff, along with a team of 15 on the dining room floor, Joulin hopes to make the restaurant a successful and unique dining destination. And it seems as though his culinary quest to be number one might end at Villa Mayfair.

“What’s next is just to stay focused on Villa Mayfair because it’s a huge restaurant, you know, and we have too many things to do,” he said. “Me? I just want to hear, ‘Thank you so much, it was so good and see you soon.’ That is most important.”