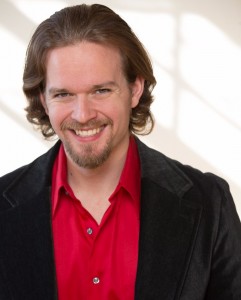 Lyric baritone Gabriel Preisser maintains a very active and diverse performance schedule across the US with over 40 operatic and musical theatre roles in his repertory including Danilo in The Merry Widow with Utah Festival Opera, Figaro in Il barbiere di Siviglia with St Petersburg Opera, Belcore in L’elisir d’amore with Shreveport Opera, Le Mari in Les Mamelles de Tiresias with Opera Parallele, Albert in Werther with Minnesota Opera, Billy Bigelow in Carousel with Minnesota Orchestra, and Prince Ottokar in Der Freishütz with Des Moines Metro Opera to name a few.  The New York Times called his performance as Lt Gordon with Opera Philadelphia “wonderful” and Opera News has praised him for his “handsome voice, charismatic energy, and timbral allure.” He has also been praised for having a “matinee idol’s charm and charisma,” “a beautiful, luscious baritone,” and “a compelling, commanding stage presence.”  Upcoming, he makes several role and company debuts as Mozart’s Figaro with Bellevue Opera, Harold Hill in The Music Man with Colorado Symphony, Tommy in Brigadoon with Gulf Shore Opera, Guglielmo in Cosi fan tutte with Opera Tampa, and a company debut with Michigan Opera Theatre in 2016/17.

Mr. Preisser has made a name for himself as a versatile, cross-over performer and has especially  been active in new works. He created the role of Lt. Gordon in Kevin Puts’ Pulitzer Prize winning Silent Night at Minnesota Opera with subsequent performances at Opera Philadelphia and Cincinnati Opera. His performance as Lt. Gordon with Minnesota Opera was also broadcast nationally on PBS in 2013 and 2014.  He recently took on the role of Farmer Bean in Tobias Picker’s Fantastic Mr Fox both with Opera San Antonio and Odyssey Opera of Boston.  He can be heard on the first official audio recording of Fantastic Mr Fox under the baton of Gil Rose with the Boston Modern Orchestra Project.  He has also performed the title role in Aldridge’s Elmer Gantry, Tom Joad in Gordon’s The Grapes of Wrath, Riolobo in Catan’s Florencia en el Amazonas, Antonio in Hagen’s New York Stories at Kentucky Opera, John Brooke in Adamo’s Little Women at Pensacola Opera, and the Shoe Salesman/Puppet role in Argento’s Postcard from Morocco also at Pensacola Opera.

On the concert stage he is garnering a reputation for his dynamic interpretation of Orff’s Carmina Burana which he has performed with the Winter Park Bach Festival, Atlanta Ballet, Gulf Coast Symphony, and others. He has also been heard as a soloist in William Walton’s Belshazzar’s Feast with Jacksonville Symphony, Bach’s Coffee Cantata with Orlando Philharmonic, Bach’s St John’s Passion with the Houston Bach Society, and Handel’s Messiah with Ars Lyrica and The Messiah Choral Society.  In addition, he is a frequent recitalist throughout the US and a proponent of American composers such as Charles Ives, Carlisle Floyd, Aaron Copland, John Duke, and others.  He was a district winner in the 2010 Metropolitan Opera National Council Competition and won the American finals of the International Lirico Concorso Competition in 2011. Mr. Preisser was a resident artist at Minnesota Opera, Kentucky Opera, Pensacola Opera, and an apprentice artist at Des Moines Metro Opera.  He graduated summa cum laude from Florida State University with a double major in Vocal Performance and Commercial Music and completed a Masters in Voice at the University of Houston.