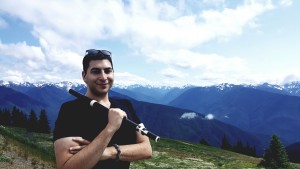 Flutist Joseph Monticello’s playing has been praised by both the New York Times and Wall Street Journal as “graceful” and for being as “exciting as the singers.” Equally at home on both modern and historical flutes, Joseph spends most of his year as second flutist of the Florida Grand Opera and Palm Beach Symphony orchestras, making his home in Miami. Joseph remains active in the historical performance world, performing with Philharmonia Baroque, Boston Baroque, New York Baroque Incorporated, and as the principal flute of the newly formed Teatro Nuovo festival orchestra, specializing in the historically informed presentation of Bel Canto operatic masterworks on period-appropriate instruments. Having received his Masters in Historical Performance from The Juilliard School, Joseph has performed and toured worldwide with many of the leading conductors and ensembles of the early music movement, including: Nicholas McGegan, Masaaki Suzuki, Jordi Savall, Harry Bickett, Richard Egarr, and William Christie, having twice participated in the Les Arts Florissants summer festival “Dans les Jardins de William Christie” in Thiré, France. Prior to his studies at Juilliard, Joseph received his Bachelor of Music from Oberlin Conservatory under Michel Debost and later, Alexa Still. It was there he first took up the baroque flute under Kathie Stewart, before continuing his studies with Sandra Miller at Juilliard.