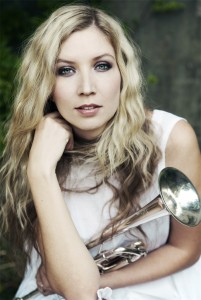 Mary Elizabeth Bowden is a member of the Richmond Symphony Orchestra and Miami Symphony. She is co-founder of Florida’s Chrysalis Chamber Players, a recipient of a Yale Alumni Grant, and has collaborated in chamber music programs at the Marlboro Music Festival, The Banff Centre and, under the baton of trumpeter Håkan Hardenberger, at the Sydney Opera House.

She recently performed as Principal Trumpet of New Zealand’s Auckland Philharmonia; in 2006 she was acting Principal Trumpet of the Daejeon Philharmonic Orchestra in Korea. At the Lucerne Festival Academy in Switzerland, she also held the principal chair in Pierre Boulez’s performance of Mahler’s Symphony No. 6, released on CD in June, 2011.

As a soloist, she won the 1st Prize at the 2012 International Women’s Brass Conference Trumpet Competition. She has performed as soloist with the Richmond Philharmonic Orchestra, Richmond Youth Symphony Orchestra, Lower Merion Symphony Orchestra, Birch Creek Symphony, and New Haven Chamber Orchestra, among several others. At The Banff Center in Alberta, Canada, she twice performed Vivaldi’s Concerto for 2 Trumpets with renowned trumpeters Jens Lindemann and Ryan Anthony.  Ms. Bowden frequently performs in recital throughout the country, both in solo programs and in duo-performances with trumpeter David Dash.

Mary studied at the Curtis Institute of Music and at the Yale School of Music.