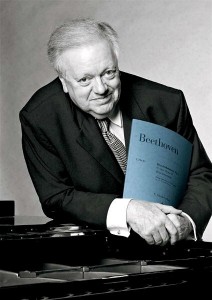 The exceptional career of Philippe Entremont began at the age of eighteen when he came to international attention with the great success of his New York Carnegie Hall debut where he performed André Jolivet’s Piano Concerto and the Liszt Piano Concerto No. 1. Since then, he has pursued a top international career as a pianist, and for the last 40 years on the podium as well.

Philippe Entremont has directed the greatest symphony orchestras of Europe, Asia and America and has worked with the world’s most prominent soloists, both instrumental and vocal.

In 1976, Entremont was appointed principal conductor and lifetime musical director of the Vienna Chamber Orchestra with which he toured the world many times since. He was also Director of the New Orleans Symphony from 1980 to 1986. He served the Denver Symphony (now the Colorado Symphony Orchestra) as music director from 1986 to 1989. From 1988 to 1990 he was conductor of the Orchestre des Concerts Colonne in Paris, and in 1993 became principal conductor of the Chamber Orchestra of the Netherlands. Entremont also founded the Santo Domingo Music Festival, a biennial event attracting renowned artists to the Dominican Republic. He was one of 10 pianists performing at the 2008 Beijing Olympic Games in the “Piano Extravaganza of the Century.”

In the 2013-2014 season, Philippe Entremont guest conducted European and American orchestras as well as performed numerous piano and chamber music concerts. He also toured with the Vienna Concert-Verein in the United States.

He embarked on a world tour in the seasons between 2010 and 2013, with many orchestral tours including the Munich Symphony Orchestra, the Israel Festival Orchestra and the Deutsche Staatsphilharmonie.

Moreover, in the 2010-2011 season, he was named the Lifetime Laureate Conductor of the Munich Symphony Orchestra.

Entremont is an active teacher in addition to maintaining a busy concert schedule. He has been the President of the Maurice Ravel Académie and also took on the role as Director of the American Conservatory of Fontainbleau, formerly led by the legendary Nadia Boulanger.

Philippe Entremont was instrumental in the creation of the Chamber Orchestra of the École Normale Supérieure de Musique de Paris – Alfred Cortot, of which he is currently in charge.

Entremont has been on the juries of the greatest piano competitions in the world : ARD Munich, Santander, Chopin in Warsaw, Van Cliburn, Leeds, to name a few.

Being one of the most recorded artists in history, all of the Piano Concertos performed by Philippe Entremont under the direction of conductors such as Eugène Ormandy, Leonard Bernstein, Pierre Boulez, Seiji Ozawa and many more, recorded by Sony Music, have been reissued in a 19 CD box-set.