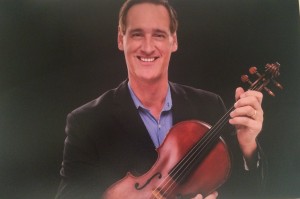 Scott O’Donnell comes to us from Endwell, N.Y. He started studying the violin at the age of seven. He began private lessons at the age of twelve. One of Scott’s first private teachers were Maryanne Wallenburg, Concert Master of the Binghamton Symphony and Peter Marsh, first violinist of the Lennox Quartet. Five years later Scott studied with Elmar Oliviera, the first American Violinist to win the prestigious Tchaikovsky competition.

Shortly after, Scott attended The Manhattan School of music in New York City, where he continued his violin studies with Professor Raphael Bronstein. Professor Bronstein was a world renowned pedagogue who also was the head professor of Violin at The Manhattan School Of Music and Hart College in Connecticut. Scott later moved to Miami Florida, where he attended The University of Miami and earned MA in Violin performance under the tutelage of Glenn Basham.

It was during this time Scott became interested in playing the Viola. He was Fascinated by the sound of the instrument and realized this is what really moved him and brought him closer to the sound he had been searching  for.

Scott O’Donnell is currently Principal Violist with The Palm Beach Opera, Palm Beach Symphony and The Boca Raton Symphonia. He has been Principal Violist with the Florida Gran Opera. Scott also has extensive chamber music experience. In addition to his many Classical Music credits Scott has a wide-range of Popular Music recording experience, working with artist such as: Barbara Streisand, Barry Gibb, Alejandro Sanz, Ricky Martin, Mark Anthony, Michael Jackson and Natalie Cole to name a few.