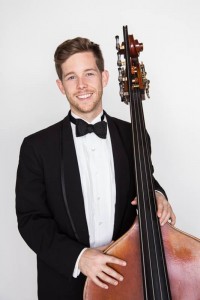 A native of West Palm Beach, Jeff Adkins is a double bassist who thrives on connecting with audiences across musical genres. Jeff enjoys a diverse career in South Florida’s vibrant music scene, currently performing as a member of Florida Grand Opera, Palm Beach Opera, and Nu Deco Ensemble where he also performs on electric bass. Jeff has had the fortune of supporting great artists including Gloria Estefan, Sir James Galway, Andrea Bocelli, Placido Domingo, Mario Cantone, Bernadette Peters, and The Platters.
Also a committed instructor, Jeff coaches young bassists at The Alexander W. Dreyfoos School of the Arts and The Bak Middle school of the Arts. Additionally, Jeff is an Artist in Residence at The Conservatory School in North Palm Beach. As a private teacher, Jeff encourages students to seek their own path by attaining the skills necessary for personal growth and expression. Many of his students have continued their studies at top music programs throughout the country.
Jeff began his studies on double bass at age eight at Palm Beach Public School. He holds Bachelors and Masters Degrees from Lynn Conservatory of Music where his primary teachers were Shigeru Ishikawa and Timothy Cobb.